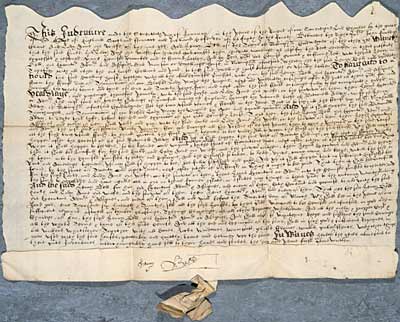 After recently completeing an online course with Pharos Tutors on Deeds and Disputes with Susan Moore, I have written an Introduction to post Medieval deeds.

Deeds are some of the most widely available and useful records held in archives.  Some can even date back as far as the 12th century.[i]  They are, however, often neglected partly because the legal language can be difficult to understand and partly due to the fact that before 1733 they were written in Latin.

Deeds are legal documents which are concerned with the ownership or possession of property, usually land or houses but can also include marriage settlements and mortgages.  You might be tempted to think that your ancestors would not have been rich enough to own property but even people of the most humble origin would have a little land such as a cottage and a field  and many people would have leased such property.  Even yeoman farmers might rent their farms for generations.[ii]

To read the rest of the article, email me and I will send you it in pdf format